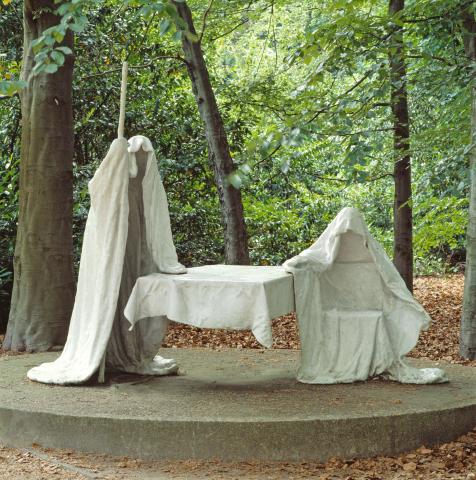 Szukalski does not simply produce autonomous sculptures, he evokes entire situations and environments.

When casting a sculpture, a volume in plaster serves as the model for the bronze cast, often in some kind of human shape. The Antwerp-based German-born sculptor Albert Szukalski turned this ancient procedure inside-out.

He uses living people as the models for plaster figures. He lays lengths of fabric soaked in plaster over their bodies and allows them to harden. The models are then freed via the front. All that remains is a void, captured within a white husk. A person in the form of a gap. A tangible absence, a frozen movement. The pale plaster, coated in polyester to weatherproof it, has a ghostly appearance. The two examples at Middelheim seem to be having a chat, around a small table. Whether spectators like it or not, they are drawn in.

Szukalski does not simply produce autonomous sculptures, he evokes entire situations and environments. Such environments were especially popular in the Sixties and Seventies thanks to the work of Edward Kienholz and George Segal.

Number 18 on the map