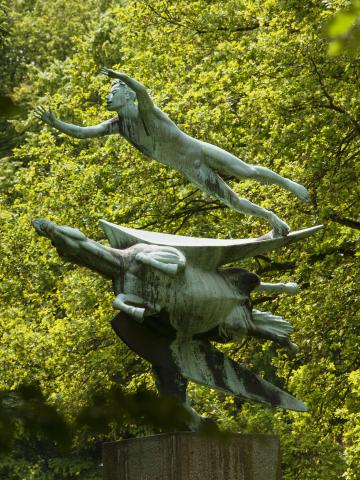 Milles’s style, akin to classicism, has yielded magnificent monuments, such as this Pegasus.

Milles came to Paris at an early age, where he was strongly influenced by Rodin. He was in high demand as a sculptor, receiving international acclaim, from his native Sweden to the United States, where he produced several works for public spaces.

Carl Milles frequently explored mythological themes, such as the myth of Pegasus, which he treated several times. Having performed numerous heroic feats, Bellerophon sought to enter heaven on the back of the winged horse, Pegasus. The gods, however, were so enraged at Bellerophon’s attempt that they threw him off the horse’s back, causing him to crash to his death. Pegasus, on the other hand, became a constellation in the skies. The subject was a favourite of Milles, who saw it as a symbol for the way humanity pursues the impossible and must consequently face its own limitations. This is a tale of hubris, or arrogance, in the traditional style, as the Greeks were fond of telling, with unique compositions of animals and humans, who often seem to be floating on air.

Millesgarden Park is in Sweden. The park is dedicated to sculpture and to Milles’s work specifically, and is named after him.

Number 16 on the map