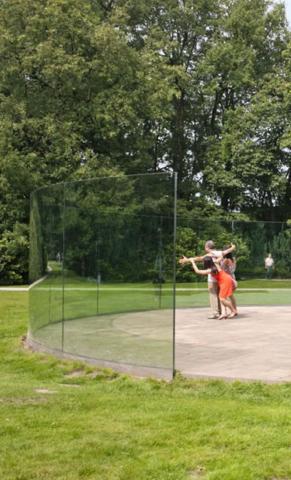 Reflection is an essential component in Graham’s work.

Dan Graham is an all-around artist who not only sculpts but is also a photographer, filmmaker and performance artist. His best known works are his outdoor pavilions containing glistening reflective plates of glass.

During his time as a gallery owner in New York, Graham became acquainted with a number of major American artists including Sol LeWitt, Roy Lichtenstein, Carl Andre and Donald Judd.

His best known works are his outdoor pavilions containing glistening reflective plates of glass in which a viewer sees a reflection of himself and his environment, and can also see how he himself is observed. In his pavilions, Graham unites observation with modern architecture, which are the two themes he has been occupied with since 1965 when he first started working with scale models.

In his work, Graham often incorporates his ideas about architecture as a reflection of social structures, taking a wide array of historical, social cultural and ideological aspects into consideration. He also writes on urbanisation and other phenomena of social culture, such as contemporary music and mass media.

All of these elements are part of this work, which was originally created for the Sint-Jansplein in Antwerp. After suffering damage there, it has now been installed in Middelheim.

Number 49 on the map