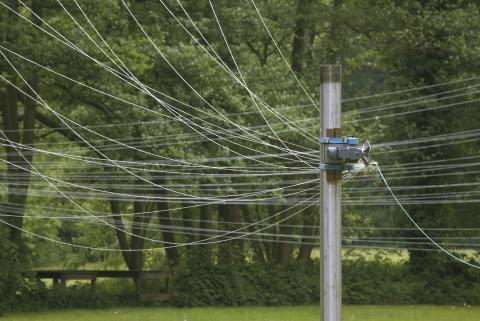 The ‘Shouting Is Breathing’ installation has a direct impact on its surroundings. An equal number of motors and bundles of wire hang from four different trees, two of which are artificial, with the wires connecting all the trees together through a widespread network.

The wires, and thus also the leaves and branches of the trees, start to tremble when the carefully installed motors vibrate. The beauty of this work is that it portrays changeability or, taking that a step further, that it is changeability. The network of wires resembles a conversation in which it is unclear who wants to say what and why, and where everything depends on factors such as the wind and gravity as well as other laws and caprices of nature. But thanks to this internal ensemble, the work also exceeds its own nature and creates its own order, over and above that of its surroundings. It becomes an island, with the trees acting as anchors, the poetry carried in the air, the wires and the crests of the trees the arches and webs of meaning. On one hand it fights its environment, but on the other it is in harmony with it, just as it is with the person who sneaks into the work, both as a result of walking around in it and also thanks to the intrinsic artificiality of the installation. When you touch the wires, which is of course permitted and even encouraged, you actually put your stamp on a piece of landscape.

In his installations, Honoré d'O combines everyday materials and objects into a whole which is not everyday. As by chance, the viewer finds objects in a context in which they do not belong – although sometimes they do – allowing for widely varying interpretations of their meaning and the influence that they have on each other. The borders between both are blurred, as in this work, but also questioned and opened up for discussion. The appearance of humans is the final touch, but are they pulling the strings?

Number 43 on the map