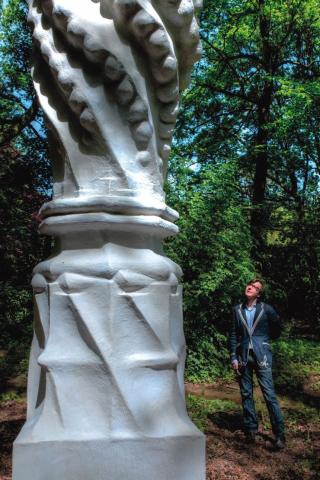 The ultimate ‘Flemish Monument’. Each side of the sculpture tells a different story.

Although sculptures may seem innocent, they always have a political dimension, like this exceptional monumental sculpture, which was produced for the Middelheim Museum. Johan Creten’s imagination is populated by themes, motifs and objects which he gives a symbolic meaning.

For example, beehives represent the community, acorns refer to power and politics and sea creatures represent that which is elusive. Meanwhile, a mussel represents a vulva but it also represents a mould, and consequently the art of sculpture itself.

‘The Column’ has been erected in a relatively concealed spot in the park, between half-forgotten sacred sculptures by Manzù, Zuniga and Mestrovic, and a visitor will find it either by accident or will by deliberately seeking it out. Thanks to its monumental proportions, the sculpture engages in a natural relationship with the surrounding greenery. Visitors are compelled to literally look up to the sculpture, but in this peaceful spot it also allows room for contemplation. The sculpture’s importance is not only a product the technique used to create it, but especially of what it has to say about us, about sculpture, about our origins, our culture, society and about Flanders.

For Johan Creten,’ The Column’ is the ultimate Flemish Monument. The work was inspired by both architecture (Roman triumphal arches and Romance and Gothic architecture) and nature (pollarded willows and sea creatures). References to a tree, a flower, a human figure and the tentacles of an octopus are all obvious, yet nothing is unambiguous, and each side of the sculpture tells a different story. The granularity of the material, which is polyester mixed with marble powder, and the tension between the various forms are likewise essential to its effect.

Johan Creten (b. 1963) lives and works in Paris and anywhere else he is invited, from Rome to Miami and from New York to Shanghai.

Number 59 on the map