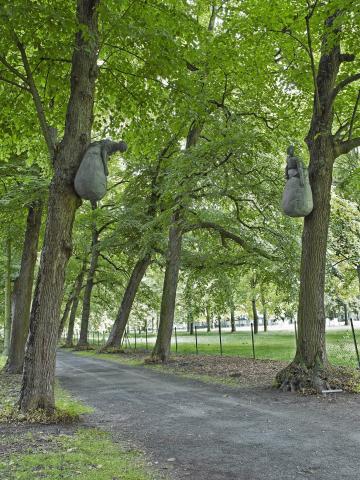 Muñoz robs his figures of any illusion of movement, sight and speech.

Juan Muñoz cast his figures in bronze. While they are akin to human figures, the expressiveness of his sculptures differs greatly from that of Rodin and others.

Muñoz was not interested in a sculptural translation of a body into a tangible object. His forms represent a specific human condition: alienation, speechlessness, a near-autistic lack of communication and loneliness. The artist stages a theatrical scenario that is similar to that of the absurdist play, Waiting for Godot by Samuel Beckett.

Like so many of his other bizarre creations, his Two Figures wait for nothing and have nothing to expect either. While modern sculptors like Rodin endeavoured to make their figures as animated as possible, Muñoz drew attention to the immobility of a bronze sculpture. His figures have no legs and are imprisoned in a straitjacket that resembles a sack, while their arms hang down lifeless like the limbs of a ragdoll. The bald skulls likewise contribute to their dehumanisation.

Muñoz robs his figures of any illusion of movement, sight and speech. And if this were not tragic enough, he installs them at unreachable height in a tree, separating them from one another with a pathway. The gap is unbridgeable, and the public watches helplessly from beyond that gap.

Number 27 on the map