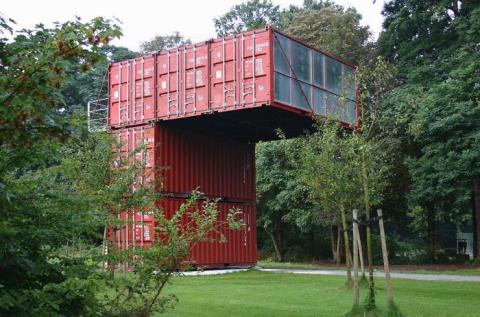 His container installations are based on basic architectural principles applied to prefabricated constructions. They resemble monuments, large sculptures or gigantic road signs in the landscape and could be beacons or milestones.

Luc Deleu has been working on container projects since 1983. His containers are ready-mades, industrially-manufactured steel boxes for transporting goods. Deleu transforms the containers from simple objects into symbolically loaded monuments such as triumphal arches, obelisks and bridges. They are often dismantled again and sent back into the world of mobility and transportation.

The proportions of the containers, with respect of the viewer and the space in which they are mounted, are of essential importance. The monuments are based on principles of scale and perspective, as the size of an object can be estimated best by relating it to things surrounding it. Thus a cathedral might seem very large on its own, but when it is wedged between skyscrapers it is much less impressive. But they are also playful and simple geometric structures that have a strong visual impact. The artist first used Lego blocks (in the 1983 work Obelisk, which can be seen at M HKA), the acme of mobile and playful building blocks, after which he moved on to toy containers.

In the 1970s, he used his Orbanist Manifesto to argue in favour of ‘orbanism’, which he proposes as an antithesis to the standard urbanism. This is the same contrast in the papal address Urbi et Orbi. In concrete terms, it meant the introduction of anarcho-utopian urban elements which would make the lives of modern human beings more free, more beautiful and more communicative. Or maybe simply more absurd.

In the container you can watch the video Luc Deleu: Tribune (Diary 1971 – 1978). The collage book Tribune – the subject of this DVD publication and booklet – is like a “container”, which the young architect Luc Deleu made at the start of his career, from 1971 until 1978. In addition to examining world history and the events of the early Seventies, the book is teeming with references to works that were produced during this period, or future accomplishments. Tribune has exactly 300 pages and is almost 10 centimetres thick. Like the cover, the pages are all covered in cuttings, photos, sketches, stamps, notes, drawings, logos, cartoons, advertising brochures, fines and world maps. This combination of history, art history and the individual artistic project makes this early work and diary of Luc Deleu such a challenge.

Number 48 on the map