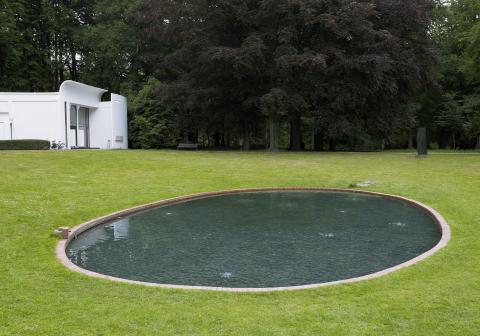 Philippe Van Snick’s work cannot be summed up in one sentence.

Philippe Van Snick created the spatial installation Poëzie (Poetry) on the lawn of Middelheim’s Braem Pavilion, making use of an existing, rather antiquated water feature.

The work consists of a pond filled with clear water. The bottom and sides of the pond are dark and covered with large, black stones, from beneath which fine air bubbles rise, bursting and causing ripples. Ten columns of bubbles spread across the water’s surface, begin to rise one after the other at ten-second intervals, until the ten columns together have been active for ten seconds. There is then a ten-second pause before the cycle begins again.

Van Snick is interested first and foremost in spatiality, analysing space, creating and manipulating it, and inviting viewers to explore what it signifies to them. Space is not something he finds, but that he constructs, via simple calculations and mathematical constructions, and the manipulation of material, colour, scale and direction.

Van Snick trained as a painter, but by the Seventies his practice was already developing towards more complex, multimedia forms, in which painting disappears into the background, sometimes temporarily. Drawings, works on paper, photography, film, sculptures and installations are all part of it. Formally much of his work is austere, and the artist manages to create a vehicle for a poetry that unites the everyday with the universal. His conceptual economy is the catalyst for an unpredictable and adventurous oeuvre.

Number 57 on the map