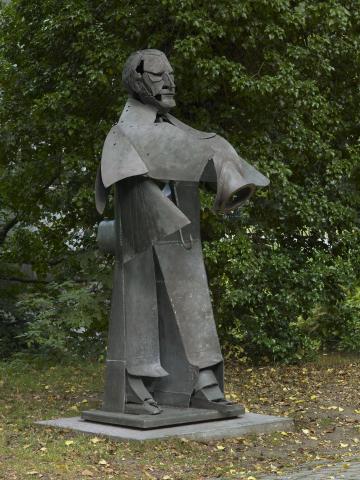 Gentils portrays outward and inward facets of the mayor’s personalities, succeeding in creating a fascinating overall portrait with wild associations.

Lode Craeybeckx left his mark on the city of Antwerp as its mayor but also as the founder of the Middelheim Museum. To Gentils’s mind, he felt that the mayor was entitled to a statue in his own museum. Gentils finally created a statue in 1972 on the occasion of Craeybeckx’s 75th birthday.

“I saw and made Lode Craeybeckx as follows. The head is open to give the viewer a sense of Lode Craeybeckx’s ever active mind The sculpture has the strong head of a prominent socialist leader with the foxlike eyes of a politician. The torso is made of ploughshares (the labourer) and at the same time is a lawyer’s gown. The chest is open, because outside of politics, Lode Craeybeckx was a man of extremely artistic sensibility and very open-hearted The pump circulates money in and out of the city’s coffers and the piano keys on the torso are a symbol of eloquence. At the bottom, on the leg, I have added a tube, the vent to release all the tension. The fireplace damper, lastly, is to sense which way the wind is blowing in politics”. Vic Gentils

This metal sculpture is a good example of Gentils’s assemblage technique. Another typical feature is the associative process which the artist used to incorporate parts of pianos in his artwork. At times, the result was a semi-abstract creation, with a generous, baroque expression.

Number 1 on the map