Ângela Ferreira was born in Maputo (Mozambique) in 1958, settled in Cape Town (South Africa) in 1975, moved to Lisbon (Portugal) in the early 1990s and now commutes between Cape Town and Lisbon.

Ângeila Ferreira was born in 1958 in Maputo, Mozambique. In 1975 she settled in Cape Town, South Africa, where she studied sculpture at Michaelis School of Fine Arts, obtaining a Master in Fine Arts degree in 1983. In the early 1990s she moved to Lisbon, where she has been a teacher at the School of Fine Arts of the University of Lisbon since 2003. Ferreira’s sculptural practice has been the starting point leading to installations which combine other media, such as videos, drawings, photographs, and written texts. Through thorough research and frequent use of architectural elements and structures, Ferreira’s practice explores the effects that colonialism and post-colonialism have had on contemporary society. The artist’s work has been shown in numerous exhibitions around the world. Notable among her recent solo exhibitions are: Murais, Makeba e Moçambique, Arte d’Gema Gallery, (Maputo, 2019); Ângeila Ferreira. Pouco a Pouco, CGAC (Santiago de Compostela, 2019); Zip Zap and Zumbi, DePaul Art Museum (Chicago, 2017); Messy Colonialism, Wild Decolonization, Zona Maco SUR (Mexico City, 2015); Political Cameras, Stills (Edinburgh, 2013); “Ângela Ferreira–Stone Free”, Marlborough Contemporary (London, 2012). In 2007 Ferreira represented Portugal at the 52nd Venice Biennale with Maison Tropicale. Some of her recent group exhibitions include: After the End: Timing Socialism in Contemporary African Art, Wallach Art Gallery, Columbia University (New York, 2019); 12th Gwanju Biennale / Imagined Borders (Gwanju, South Korea, 2018); 10th Taipei Biennale / Gestures and Archives of the Present, Genealogies of the Future (Taipei, Taiwan, 2016); 3rd Lubumbashi Biennial (2013); Between Walls and Windows, Haus der Kulturen der Welt (Berlin, 2012); “Appropriated Landscapes”, The Walther Collection (Neu-Ulm, Germany, 2011); Monument und Utopia II, Steirischer Herbst (Graz, Austria, 2010) and Modernologies, Museum of Modern Art (Warsaw, 2010) / MACBA (Barcelona, 2009).

This installation-sculpture is a wooden remodelling of the facade of a gas station in Lubumbashi (DRC). The original is a modernist building designed by Belgian architect Claude Strebelle in the 1950s in what was then Elisabethville. The innovative interplay of lines symbolized the alleged optimism and progressive nature of late colonialism. By only showing the facade of the building, Ferreira implies that these were empty promises with no substance. Strebelle’s work was erected in a city that was still segregated and reserved for white people. The artist elaborates on that dissonance in her videos. In the first, two Lubumbashi residents on the roof of the gas station sing a folk song about the horrors of working in the mines – a symbol of the empty promise that colonialism would bring progress and wellbeing to the Congo. In the second we hear a sad rendering of the hit song Indépendence Cha Cha, a symbol for the thwarted outcome of emancipation. 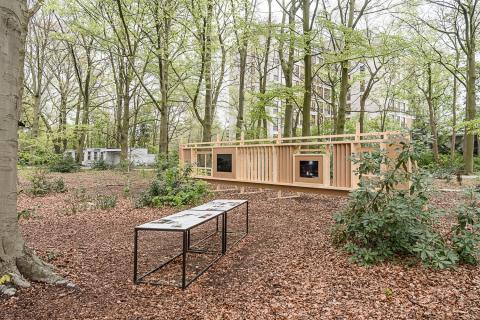