Born in 1965 in Dakar (Senegal), of Benin descent, lives and works in Brussels (Belgium).

Pélagie Gbaguidi was born in 1965 in Dakar, Senegal, and is of Benin origin. Since graduating from the School of Fine Arts of Liège (Belgium), she has worked and lived in Brussels. Defining herself as a contemporary griot, Gbaguidi’s paintings, writings, drawings, and installations are musings of individual and collective memory. She critically engages with the misuse of history; deconstructing stereotypes, rewriting meta-narratives, and using myth as an open space to create a simulacrum of the present in flux. Among other venues, Gbaguidi has participated in numerous international exhibitions such as the Biennale of Dakar (2004, 2006, 2008, 2014, 2018), Divine Comedy: Heaven, Hell, Purgatory Revisited by Contemporary African Artists, MMK Museum für Moderne Kunst, Frankfurt in 2014; the National Museum of African Art Smithsonian Institution, Washington, DC, in 2015; Afriques Capitales, Gare de Saint Sauveur, Lille in 2017; the documenta 14 in Athens and Kassel in 2017; Decolonizing the Body at the Eternal Network Gallery in Tours in 2019; and Multiple Transmissions: Art in the Afropolitan Age at WIELS in Brussels in 2019. In 2018, she was a fellow at Civitella Ranieri Foundation in Italy.

Gbaguidi elaborates on the role of education in imperialism and the accompanying racism. Here in this building  the colonial  perspective was taught, as the promo film from 1939 Sous l’étoile d’or illustrates. The broad Belgian population was also informed through education, among other ways, that the colonial enterprise was respectable. The truth was hidden, as the thinly veiled images of disciplined black people in the installation testify. We still live with that legacy. As long as our schools don’t focus more on colonial history education and disproving stereotyping, white people will continue to see their black fellows as inferior beings. Gbaguidi herself takes the lead with a workshop on stereotyping in a classroom in Brussels – the students’ drawings have been incorporated into the installation. 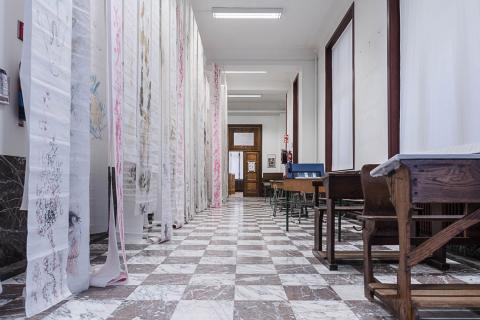