The Middelheim Museum is proud to present SOME TIME, a solo exhibition of works by the leading British artist Richard Deacon. The exhibition is made up of some 31 works, both monumental works and smaller pieces, which are on display in different parts of the museum park. Deacon’s Never Mind is central to the exhibition; this key piece from the museum collection was acquired in 1993 and has been restored and re-coated in stainless steel especially for this exhibition.

Since the 1980s Richard Deacon has played a prominent role in contemporary visual arts. He refers to himself as a fabricator, someone who wants to test the resilience of materials, language and the meaning of objects to the very limit. His fascination with the possibilities of the most diverse materials such as wood, textiles, steel, paper, leather, marble, clay, vinyl, corrugated iron, cardboard or PVC drives him from one work to the next, with an awe-inspiring oeuvre as a result. The glue, metal joints, bolts or joints are intentionally visible so that the spectator is constantly reminded of that creation process.

The exhibition primarily focuses on ‘variations’ – which could be seen as Deacon’s trademark. By once again applying a logical and consistent series of rules to the same basic or starting situation, the artist keeps on shifting a border and adding possible new interpretations, until he arrives at ‘new’ works of art which will then form part of a series. The title of the exhibition, SOME TIME, refers to its temporary character. Or to a short timeframe: things are what they are only for a short time.

The refabrication of Never Mind

In 1993 - Antwerp was the Cultural Capital of Europe - the Middelheim collection made a decisive step in the direction of contemporary art.  Never Mind is one of the key works to be purchased that year. Twenty-four years later Deacon, in collaboration with the Middelheim Museum, moved towards a ‘refabrication’ of the work. Refabrication – also a form of variation – is at the same time a fresh start and a new perspective for the future, the return to or copy of an old element and the creation of a new work.

Deacon attaches just as much importance to language as to the materiality of his works. Speech and language are an important characteristic of what makes us human. They are the instruments with which we give meaning to the world and the things around us. Meaning (the ‘what is it?’), and thus also the meaning of a work of art, is not a constant for Deacon, but something that must be actively created and built up, little by little and over and over again. And so it is something which lasts for ‘Some Time’.

On the occasion of the exhibition a limited edition 10-inch vinyl disc has been brought out, as has a publication with contributions by Gwynne Ryan, Henk Visch and Richard Deacon, Bart De Baere, Iris Kockelbergh and Sara Weyns.

He represented Wales at the Venice Biennale (2007) and has participated in the Venice Architecture Biennale (2012), Glasgow International (2006) and documenta 9 in Kassel.

Richard Deacon won the prestigious Turner Prize in 1987 and the Robert Jakobsen Prize in 1995. In 1996 the French Ministry of Culture awarded him with the Chevalier de l’Ordre des Arts et Lettres, and in 1999 he was proclamed a CBE (Commander of the Order of the British Empire).

He is currently working on new exhibitions for China and Prague.

Opening times depending on the season

Extra with the exhibition

For groups of adults 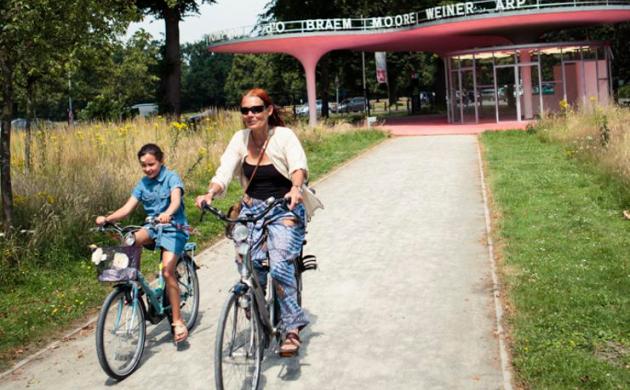 Practical information concerning opening hours, accessibility and everything that the museum offers.