Young Artist Fund. The holes will be filled again

In the autumn of 2021, the Middelheim Museum, Delen Private Bank and Middelheim Promotors will be presenting the "Young Artist Fund", a targeted invitation to 3 young artists (under 40 and living/working in Belgium) to create a new outdoor sculptural work for the Middelheim Museum. And so the museum, together with the public, is taking an important step in the works of a young generation of contemporary artists.

The 3 new creations are presented in the formal landscape of Hortiflora and literally and figuratively move the visitors. The works challenge us to think about what we see and what we don't see, where our imagination can complete the story.

Mostafa Saifi Rahmouni (°1991), was born in Rabat and currently lives and works between Bordeaux, Brussels and Rabat. His work is built around various cultural, social and political references, around personal stories and the great history. The artist combines serious and tragic subjects, or references to post-colonial issues, with poetry and humour. Using fragments from everyday life, his works reveal the mundane and the morbid, but also the exceptional and the sublime. Mostafa Saifi Rahmouni completed his post-master at HISK in Ghent, after having followed a training course at the National Institute of Fine Arts in Tetouan and a sculpture workshop at ENSAV-La Cambre in Brussels. Mostafa Saifi Rahmouni’s work has been shown in numerous exhibitions in Europe, such as Rosalux, Berlin (2018); Centrale-Lab, Brussels (2017); BOZAR as part of the Moussem Cities Festival, Brussels (2018); Biennale de Sharjah, Beirut (2017) and at the 63rd Salon de Montrouge (2018).

Central in Maika Garnica´s (°1992) practice is the relationship between the environment, the spectator and the artist. She often applies prototypes to comprehend the complex relation between form and matter while instigating the position of the body as a vehicle for social connections. Through various contextual variations the nature of the work shifts spontaneously from sculptures, utilitarian objects to sound installations. Garnica currently lives and works in Antwerp, where she obtained her Master's Degree in Fine Arts at the Royal Academy of Fine Arts in 2015. Her work has been exhibited in numerous solo and group shows in Belgium and abroad, such as SMAK, Ghent (2016); Netwerk Aalst (2018); Stedelijk Museum, Amsterdam (2020) and M HKA, Antwerp (2019 & 2021).

Maika Garnica's work came about thanks to a special collaboration with art foundry Van Geert. 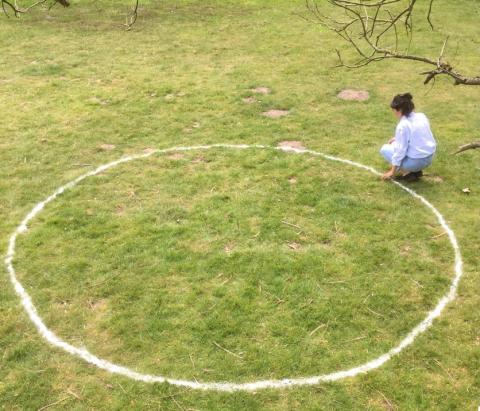 mountaincutters (founded in 2014) is a hybrid identity, a duo of artists working in Brussels. With a focus on in-situ sculpture, they draw on the connection between human beings and the environments they inhabit. Their steel structures, glass elements, ceramics, fabrics and organic materials, as well as their poems and copper circuits form temporary ecosystems, in which energy is channeled between the human, the organic and the inanimate. mountaincutters' interventions generate, through the establishment of a poetic system, an aesthetic uncertainty that favors transient situations and unfinished forms. mountaincutters' work has been presented in solo and group show in Belgium and in France, such as La Verrière-Fondation Hermès, Brussels (2021); CAB Foundation, Brussels (2017); Le Creux de l'Enfer Art Center, Thiers (2019); Le Grand Café Art Center, Saint-Nazaire (2018); Friche de la Belle de Mai, Marseille (2020) and Extra City Kunsthal, Antwerp (2016).