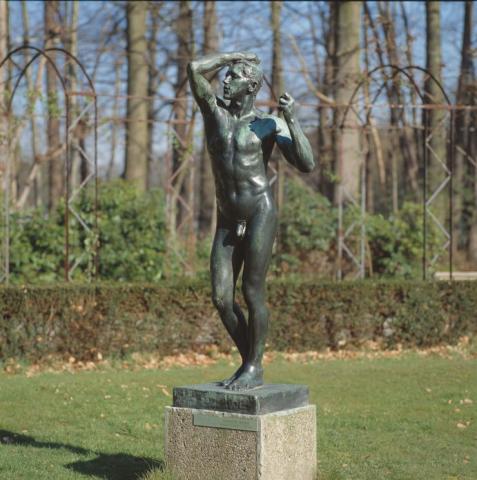 Rodin created a physically perfect figure, whose spirit is in an almost child-like state.

Initially Rodin intended to portray the figure as a casualty of war. Under the influence of Jean-Jacques Rousseau, however, and of the countryside around Brussels, he decided to call it Man of the Forest instead. Ultimately he settled on The Bronze Age.

At the end of his stay in Brussels (1871–77) Rodin wanted to create a work that would definitely seal his reputation as a sculptor. A young, eighteen-year old Flemish soldier served as his model for over 18 months. The man’s pose and movement are of a man who is self-aware and ready for the future. Some critics at the Salon des Artistes français suggested that the liveliness of the sculpture was due to the fact that Rodin cast the sculpture directly from his live model.

On loan from the Royal Museum of Fine Arts since 1950.

Number 5 on the map