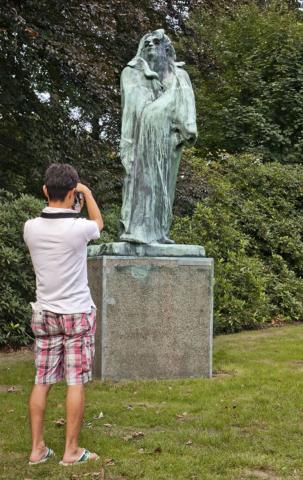 It took Rodin six years to complete his sculpture of Balzac and then it was rejected.

Besides other interests, there was also an ideological conflict, about the essence of sculpture. For Rodin, the sculptural value of mass and volume took precedence. He felt that these elements should express the irresistible power of the human genius without making concessions to details or imitation.

In 1891, the Société des Gens de Lettres commissioned Rodin with creating a Monument Balzac within a period of eighteen months. A great number of sketches, after old portraits, paintings and drawings which featured Balzac, as well as the study of people from Balzac’s native Touraine and further acquaintance with his literary work gave rise to the creation of a series (39 in all!) of sculptures. They were all practice runs for the final version that can be found here in Middelheim Museum. In the meantime, Rodin had repeatedly missed the deadline and so when the statue was finally completed in 1897, it was rejected.

Rodin himself considered his sculpture of Balzac a decisive step towards open air sculptures. It is impossible to overestimate Auguste Rodin’s influence on modern and contemporary sculpture. After having studied Michelangelo’s work in 1875, he would go on to become one of the greatest sculptors of all time, ushering in the modern era for sculpture. In a sense, his giant personality and work are a turning point between tradition and modernism. In fact, his works even incorporate aspects of both eras.

“From Rodin to the present” is more than a slogan, it is a guideline for the Middelheim Museum.

On loan from the Royal Museum of Fine Arts since 1950.

Number 4 on the map