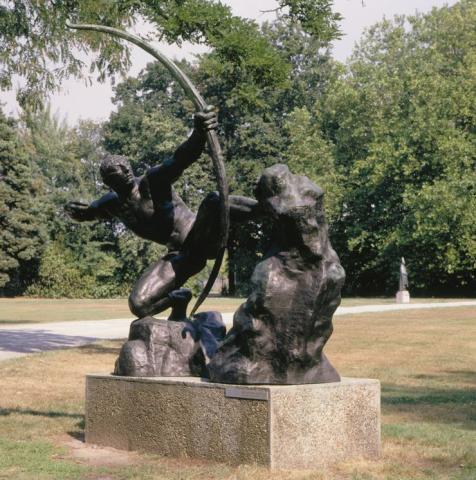 Bourdelle, a contemporary and associate of Rodin, was fascinated by Greek mythology.

This sculpture by far is Bourdelle’s most famous work, generating fame a number of monumental commissions. In Hercules the Archer the Greek hero Hercules is tasked with killing the Stymphalian birds as part of the 12 labours assigned to him.

The immense power expressed by the taut bow and Hercules’s pose is transmitted to the wider surroundings. Not only does the archer fire an arrow, but he seems to unleash something far greater. He literally gathers up the physical powers of his surroundings, drawing them to him and then releasing them again.

Bourdelle’s influence on art history is significant. Among his pupils were Germaine Richier and Alberto Giacometti. After his death, his studio in Paris was turned into a stunning museum.

Number 6 on the map