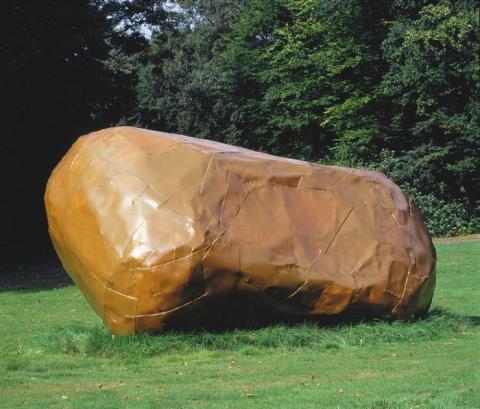 The artist’s delightfully eccentric reflections are a work of art in themselves.

Franz West made a number of new outdoor sculptures for his solo show at Middelheim in 1998, two of which the museum purchased. West had steel sheets welded onto a metal structure. He was primarily interested in form, colour and material.

There is no fixed symbolism behind his sculptures. The artist recorded an explanation of his works at the time of the exhibition: ‘The four new sculptures are now also nearly finished. “Nearly” means they already have titles ... Freie Form [Free Form] puts me in mind of the standardisation in [Richard] Serra, who constructs his sculptures using standard dimensions, standard elements, and because this work avoids standardisation, it might be called Freie Form. But not only does it resist standardization, it avoids potential associations as much as possible too, at least the most obvious ones... “Almost finished” also means that the colouring process is finished: they will be brown, lemon yellow and ochre-brown (…) The meaning lies in the fact that the man-made things people most often see in nature, besides buildings, are cars. And you rarely see pink or ochre cars ... I think, probably because pink and brown are intimate colours. They are colours for inside, and for enclosed spaces like toilets. Pink is most associated with underwear and intimacy. Brown, excrement, is an aspect of intimacy as well.’

Number 32 on the map