Hank Willis Thomas was born in New Jersey (USA) in 1976 and lives and works in New York City. He holds a BFA from New York University, New York, NY, an MA/MFA from the California College of the Arts, San Francisco, CA, and he has received several honorary doctorates. Thomas is a conceptual artist working primarily with themes related to perspective, identity, commodity, media, and popular culture. His work has been exhibited throughout the United States and the world including: the International Center of Photography, New York; Guggenheim Museum Bilbao; Hong Kong Arts Centre; and the Witte de With Center for Contemporary Art, the Netherlands. Solo exhibitions of his work have been featured at the California African American Museum, Los Angeles, CA; Cleveland Museum of Art, Cleveland, OH; Corcoran Gallery of Art, Washington, DC; Brooklyn Museum, Brooklyn, NY; among others. Major group exhibitions of his work include the 2017 inaugural show at Zeitz Museum of Contemporary Art Africa, Cape Town; P.S. 1 Contemporary Art Center, Long Island City, NY; The Studio Museum in Harlem, New York, NY. Thomas’ work is included in numerous public collections including the Museum of Modern Art, New York, NY; Whitney Museum of American Art, New York, NY; and the National Gallery of Art, Washington, DC, among others. His collaborative projects include For Freedoms, which was awarded the ICP Infinity Award for New Media and Online Platform in 2017. Thomas is a recipient of numerous fellowships, such as the Gordon Parks Foundation Fellowship (2019) and the Guggenheim Fellowship (2018).

A series of works

In 2019 Thomas made a series of works on the relationship between Antwerp and Congo that takes the hand as a recurring motif. This artist’s gaze is permeated by Leopold II’s colonial rule in Congo. It determines his perception of the place that hands, detached from a body, occupy in the city’s visual symbolism. This personal and artistic association can also be perceived as painful or exaggerated. After all, these Antwerp symbols have a completely different origin and the Antwerp and Flemish population is much more acquanted with their meaning. In Antwerp, the hand is a symbol that explains the name of the city, or represents the urban liberties and rights. It goes back to the 13th century. The biscuit dates from 1934 and was invented by a Jewish baker. Today it is an official regional speciality. The chocolate version made its breakthrough in the 2000s as a quintessential Antwerp delicacy. The practice of cutting off hands belonged to the most gruesome period in Belgian colonial history, during the reign of King Leopold II over the Congo Free State. For the artist, the associations refer to the role that the city played in the import of valuable raw materials from the colony. By visually connecting the images in his artworks, he wants to make his perspective on history visible and allow different interpretations of it to co-exist.

The three  photo works are screen prints on retro-reflective vinyl. This material makes it possible to place a second image beneath the first, which only appears under the flash of a mobile phone camera. The phone is a reference to the exploitation of the natural resources of Congo for the enrichment and comfort of Westerners. We see this exploitation in the past (ivory in 500 Euros Ivory Tower), but also now (the coltan in our phones). In Brabo and the Ivory Tower, a link is made between that exploitation (ivory) and, depending on your perspective, either the enrichment of Antwerp (beautiful fountain on Grote Markt) or the ruthless exploitation of workers. Antwerp, Belgium to Boma, Congo at Dakar draws attention to the port of Antwerp, which, until aviation developed, was the gateway between Belgium and the colonies. People left and arrived, but above all: all the goods from the colonies entered through here, goods that contributed to the prosperity of Antwerp. 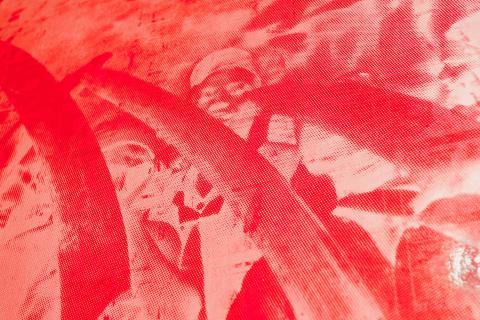 The ‘Antwerp hands’ form a pattern that refers to the famous textile from the Kuba Kingdom (situated in the southeast of what is now the Democratic Republic of Congo). The histories of Belgium and the Congo are intertwined, but it is a history of violence, even if it looks beautiful. 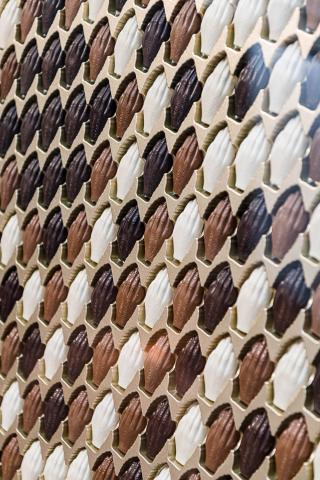 This image zooms in on the triumphant gesture of Ambroise Boimbo who stole King Baudouin’s sabre on Independence Day, an action immortalized by German photographer Robert Lebeck. Here the hand is no longer an icon of violence and suffering, but one of triumph and liberation. This could be a new monument to Congoville, one created from an African perspective.