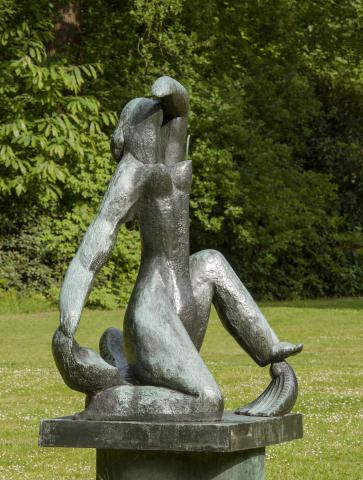 The sea in Brittany and on the French Riviera inspired Laurens to create figures that are as dynamic as the waves.

Initially Laurens felt a strong attraction to the work of Rodin. Subsequently, however, his allegiance swung to the Cubist group of sculptors, after befriending Georges Braque. From 1921 onwards, his work became more organic and rhythmic in form.

As a sculptor, Laurens dedicated himself fully to nature, which he tried to integrate as fully as possible in his work and vice versa. He considered the female body the most beautiful subject of all. Here that body becomes the sea and vice-versa. The title, Océanide, is an obvious reference to this, as is the work’s form. The slender upper body is stretched out and upwards, its left foot supported by a stylised wave, on a heavy base. The arms resemble fins, while the rhythm of the image and the contrast between light and shadow evoke the sea.

Centre Pompidou in Paris has a larger version of this work, which stands 275 centimetres high. A smaller Océanide also exists, measuring a mere 33 centimetres.

Number 13 on the map