Founded in 2015 in Kinshasa by Eddy Ekete and Aude Bertrand, KinAct is an international festival and artist collective that collaborates with varying performers.

Eddy Ekete was born in 1978 in Kinshasa (Democratic Republic of Congo) and Aude Bertrand in 1988 in Valréas (France). They live and work alternately in Paris (France) and in Kinshasa. For Congoville KinAct works together with Louis Van Der Waal (°1979, Netherlands), Precy Numbi (°1990, Democratic Republic of Congo) and Charlien Adriaenssens (°1988, Belgium).

The La maison du chef / Ndaku ya Mokonzi project consists of an installation representing the house of a traditional Congolese chef, a radio program in which you as a visitor can share your Congoville, filmed performances and  performance characters.

The Mokonzi’s house is built from the waste that the West dumps in Africa and KinAct gives it back to us. This ‘donation’ refers to the colonists who visited the chiefs in their homes bringing gifts (mirrors, alcohol or guns) in exchange for the rights to their land. Just as the waste today is toxic to people and the environment, the gifts offered then were also poisoned. KinAct wants to re-enact the exchange. They invite us to share our own fragments of Congoville with them and their listeners: we can tell stories and recount memories during their radio broadcast on July 24. In this way the house becomes a place for collecting, exchanging and restoring.

KinAct is best known for its performances in the streets of Kinshasa, with figures such as the Homme Canette and Papa Miracle (see the performances on video). They have created several new characters for the Middelheim Museum, each with their own costume fashioned from waste material, not dressed fancily like the typical dandies. The materials in themselves have a meaning, from the rubber of the Leopold II era to today’s electronic waste. If they were to move, these exuberant figures would force visitors into uncanny encounters taking them out of their comfort zone.

Members from KinAct will produce a broadcasted radio show live in the Middelheim Museum from the pavilion of Atelier Van Lieshout. The program can be listened to online, at home or in the park, in 3 episodes:

KinAct is short for Kinshasa-in-action and aims to stimulate exchange between artists from Africa and Europe. Large African cities such as Kinshasa have a thriving artistic scene with artists displaying their work directly to the public, without galleries or museums as is common in the West. The KinAct participants create their (street) performances before the eyes of – and in interaction with – an audience of millions. Social themes such as the environment, health care, superstition, violence, African identity and the struggle for survival are central to this. Much attention is also paid to workshops for children, who learn to express themselves in different ways. Interest in this approach is also growing in Europe, with an increasing number of street performance festivals, some directly inspired by KinAct.

Congolese filmmaker  and  photographer Elie Mbansing has been involved  with KinAct since  the beginning. In this film he portrays the Afrofuturistic atmosphere of the different editions in Kinshasa. 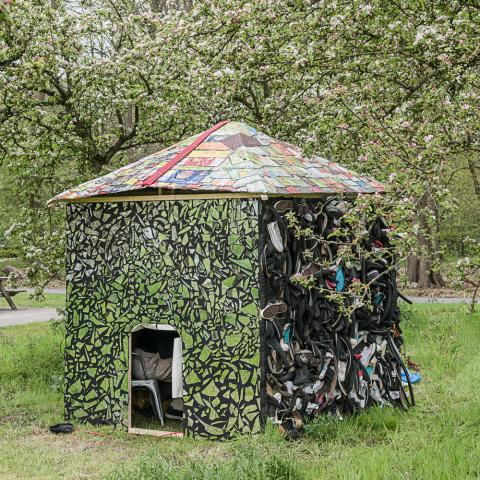 Around 1950 several colonial  propaganda films were shot, documenting selected groups of Africans being taken on tours of Belgian ‘highlights’ – in this case Congolese sailors on leave in the port of Antwerp. Visits ranged from cultural sites to monuments celebrating colonization. Meanwhile, an alienating and imposing voiceover exalts the prescribed admiration that Congolese are to feel for an ‘unsurpassed’ Western civilization.

In a newly filmed performance, KinAct Collective enters into a dialogue with this archive  film. In contrast to the sailors who had to follow the script, the performers use their bodies and self-created costumes to loudly claim their place in Antwerp’s public space. Charged with the energy of the contemporary Kinshasa streets where they were born,  these radical  anti-flâneurs make  themselves highly visible.

“Toza kaka means both ‘we are together’ and ‘we are (still) here’. It is a reference to our forward-looking cooperation as a collective, and the historical coexistence of Belgium and the Democratic Republic of Congo – which is still ongoing; ‘we are still here’ also refers to the garbage that wanders the streets and does not decay, and it is a statement by many of our colleagues and friends in Kinshasa: the government does not look after us, our stories are ignored, life has been a battle for centuries, but we are still here” 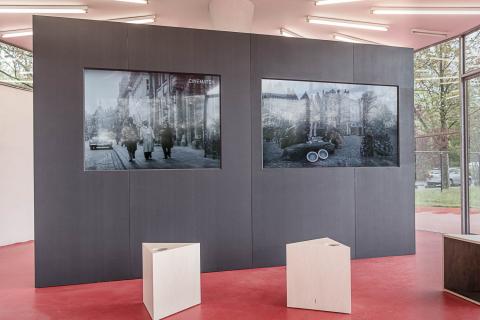