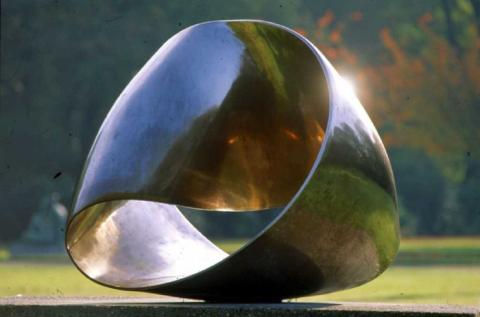 This strip encapsulates the principle of infinity. In this work, and many others, Max Bill succeeded in visually transposing the purely abstract notion of “finite infinity” into a harmonious, tangible form.

Bill’s work has neither a beginning, nor an end. It is impossible to distinguish the inside from the outside. It is a spatial symbol, into which one can go deeper and deeper, but from which you always return. When Bill conceived this work in 1935, he claimed to have no idea of this. He wanted to refer to purely mathematical forms that define a large part of his work.

This is perhaps why Bill has sometimes been categorised as a “concrete abstract artist”. He sought to achieve a greater universality of the visual language through his geometric formalism but was not always successful. Bill was part of several movements, passing through Cubism and Dadaism, studying in Dessau at the Bauhaus, with influences from Kandinsky, Klee, Arp, Mondrian, Gropius and Le Corbusier. In addition to being a sculptor, he was also an architect and a graphic designer.

Number 10 on the map