Pascale Marthine Tayou was born in Cameroon in 1966 and lives and works in Ghent, Belgium, and Yaounde, Cameroon.

Pascale Marthine Tayou was born in Cameroon in 1966 and lives and works in Ghent, Belgium, and Yaounde, Cameroon. At the beginning of his career, the artist feminized his first and middle name into “Pascale Marthine” with the intention of undermining the importance given to authorship and gender in the art world. Tayou works with a multiplicity of media and topics. Whether in the form of sculptures, installations, videos, drawings, or objects, his practice centers around the hybridization of cultures, the individual journey in the globalized world, and the place and perception of his African identity in it. Tayou’s work has been presented in solo and group shows all around the world, including at the Mu.ZEE (2019), Bozar (2015), Kassel documenta 11 (2002), Venice Biennale (2005, 2009), Turin (2008), London Tate Modern (2009), Gwangju Biennale (1997 and 1999), Santa Fe (1997), Sydney (1997), and Havana (1997, 2006).

The exhibition starts (and ends) on an optimistic note: there is a way to a happier future. With his typical bright colours, Tayou draws an alternative path on which we can stroll together. He paints a picture of a life with ‘the eternal sun under our footsteps every day’. For Tayou, the museum can be a place where we meet, where we exchange ideas and where we learn from each other. Le Chemin du Bonheur traces the possibility of another path within the Middelheim Museum and beyond, aspiring to map reconciliation for the future, transcending the colonial sediments lying underground. 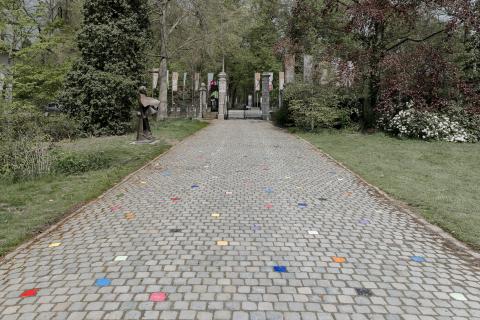 Stones symbolize protest and revolution. Throwing stones has been part of uprisings throughout history: the 1830 French barricades, May 68, and the Palestinian Intifada, for example. Arranged in a pile, here the stones appear as if in a post-destruction moment, after the dismantling of an unjust order and of our cities’ fraught foundations. To this image of protest, Tayou joins symbols of peace: a white flag planted on top of the colourful pyramidal mound. The installation combines the necessity of reparation and at long last, the aspiration for reconciliation. 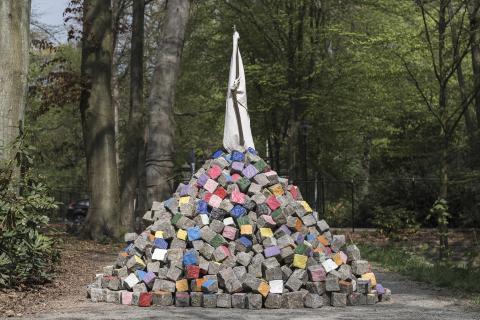