Born in 1978 in Lubumbashi (Democratic Republic of Congo), lives and works alternately in Brussels (Belgium) and Lubumbashi.

Sammy Baloji (1978) was born and raised in Lubumbashi, DRC, and lives and works between Brussels (Belgium) and his hometown. He studied computer and information science and communication at the University of Lubumbashi, and continued with photography and video at Ecole Supérieure des Arts Décoratifs, in Strasbourg. A visual artist and a photographer, Baloji has been exploring the memory and history of the Democratic Republic of Congo. His work is a perpetual investigation into the cultural, architectural, and industrial heritage of the Katanga region, as well as an inquiry into the effects of Belgian colonization. His most recent solo shows include Sammy Baloji, Other Tales, Lund Konsthall and Aarhus Kunsthal (2020); Congo, Fragments d’une histoire, Le Point du Jour, Cherbourg (2019); A Blueprint for Toads and Snakes, Framer Framed, Amsterdam (2018); Urban Now: City Life in Congo, Sammy Baloji and Filip de Boeck, The Power Plant, Toronto, and WIELS, Brussels (2016-2017). Among other venues, his work has been shown in collective exhibitions such as the Fotofest Biennial 2020, Houston; the Palais de Tokyo, France (2020); the 2019 Chicago Architecture Biennial; the 22nd Sydney Biennale (2020); the Kassel/Athens documenta 14 (2017); The Garage Museum of Contemporary Art, Moscow (2017); the Smithsonian National Museum of African Art, Washington, DC (2017); the Venice Biennale (2015). A Chevalier des Arts et des Lettres, Baloji has received numerous prizes and was a 2019-2020 resident at the French Academy of Rome-Villa Medicis. In 2008 Sammy Baloji co-founded the Biennale de Lubumbashi.

Congolese copper was also an indispensable raw material for the artillery of the two world wars. Among other things, it was used in cartridge cases. Soldiers often carved figures in these cartridges: to keep fear at bay in the trenches or against boredom during their revalidation. We still find these shells  today  in Belgian living rooms and cafes, especially in West Flanders. They stand on the mantelpiece or serve  as a flowerpot. Baloji reappropriates this recycling by presenting Congolese plants in Congolese copper. Even the typical Flemish sansevieria is a legacy of Belgian colonization! Congoville is everywhere, also in what is growing from our soil. 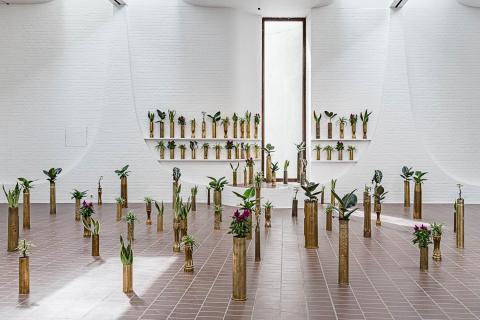 Monuments glorify chosen memories, they are not the mirrors of history. Sammy Baloji’s sculpture is a small- scale replica of the dome covering the imposing Église du Sacré-Coeur de Cointe in Liège that commemorates the fallen allied soldiers of WWI. Made of thirteen tons of copper from the Katanga mines, the memorial nevertheless ignores the Congolese soldiers who died for Belgium in WWI as well as the Congolese forced labourers who extracted the mineral. Baloji created a new (half) copper dome retrieving them from oblivion, inscribing scarification patterns typical to the Luba and Lunda groups from the Katanga region. By making the surface akin to the ancestors’ decorated skin – all the more so with the copper’s shiny brown colour – Baloji makes their bodies and their identity marks present. 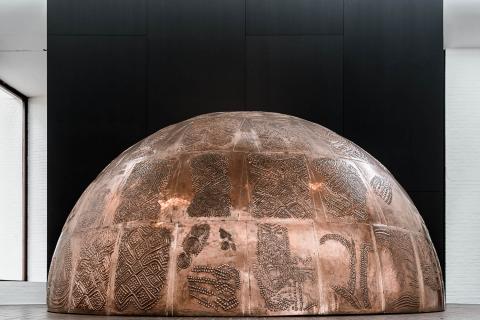