Born in 1962 (Algeria), lives and works in Paris and the Oise region (France).

Zahia Rahmani was born in Algeria in 1962 and educated in France. She is a writer, an art historian, and a curator. Rahmani teaches at the Institut National d’Histoire de l’Art (Paris), where she directs the program “Histoire de l’art mondialisée” (“Global Art History”). From 1999 to 2003, she created and directed the post-diploma Research Program for the École nationale supérieure des Beaux-arts de Paris. She has worked at the Villa Arson / National School of Art in Nice and at the National Gallery of the Jeu de Paume. In 2012, she set up at INHA, “Made in Algeria”, a program dedicated to colonial mapping and capture, and she co-curated the eponymous exhibition at MuCem in Marseille (2016). In 2015, she launched the “Observatory: Global Art Prospective” program at INHA, with a group of researchers and exhibition curators. A regular lecturer in France and abroad, Rahmani is the author of several books, including France, récit d’une enfance (Sabine Wespieser, 2006), and Made in Algeria, généalogie d’un territoire (Mucem, 2016). She is a member of the Collège de la Diversité and Chevalier des Arts et Lettres. She developed and designed the installation Sismographie des Luttes – Towards a global history of critical and literary reviews, first presented in the off-program of the 2018 Dakar Biennale (RAW Material Company). This work is the result of a long process of collective, multilingual, and decentralized research led by the INHA within the framework of the program “Observatoire: Globalisation, Art et Prospective” and the project “Global Art & Cultural Periodicals.

Seismography of Struggle, Towards a Global History of Critical and Cultural Journals (2017-2021)

This installation loops more than 900 covers, manifestos, texts and pamphlets taken from the long and rich history of political and cultural resistance to Western imperialism around the world. Resulting from extensive research, the installation presents periodicals from Africa and other colonized regions, from the eighteenth century until the end of the twentieth. These printed cultures were long denied, devalued, and often censored, which erased the militant and intellectual vigour of the colonized people, and perpetuated the lie that the ‘civilized Westerner’ had a duty to raise the ‘primitive other’. Rahmani’s work is a groundbreaking contribution to the rewriting and balancing of colonial history. Sixty years after its closure, this installation  finally brings  the African perspective to the former Colonial College of Belgium. 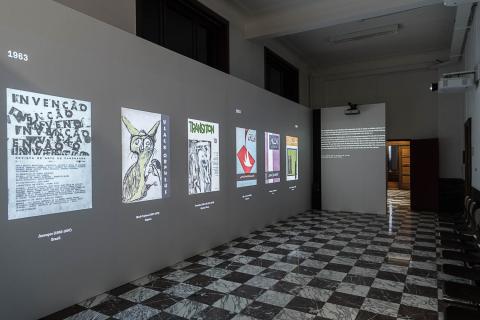