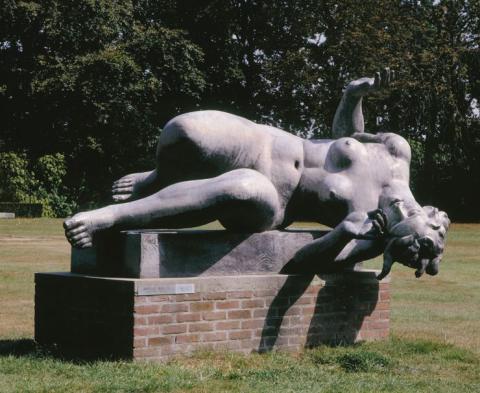 A work that was created as a result of a cancelled commission.

In 1940, Maillol was working on a sculpture, entitled The Mountain, in memory of Henri Barbusse.  When the money suddenly ran out, Maillol reclaimed the rights to his sculpture and sawed it up, using the parts to create a new work, which he called The River.

The woman, who is reclining on her left side, is a very dynamic figure – an aspect that is typical of Maillol’s later work. He only coined the title much later, in 1943, when he visited the gardens of Versailles where the statues of the fountains made a profound impression on him.

Maillol studied painting, illustrated books and even had a weaver’s workshop, sparked by his fascination with the tapestries in the Musée de Cluny in Paris. He was forced to give up weaving, however, due to an eye disease. After travelling, he returned to Paris where he took up sculpture. He started out cautiously, using wood and terracotta, but soon became successful, thanks in part to the appreciation that Rodin showed for his work.