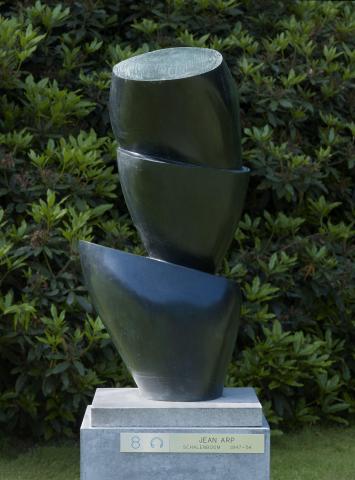 Arp’s relationship with his art is similar to that of a plant with the fruit it bears.

The idea of the “fruit” is quite vital to Arp’s work. This composition with three “bowls” creates a synthesis between the geometric and the organic, the natural and the consciously structured and managed, the accidental and the rationally considered.

The three bowls form a “tree of bowls”, in which each element is independent but above all contributes to a larger whole, which is greater than the sum of its parts.

Jean Arp’s sculptures seem to have grown organically. You’ll hardly ever see straight lines in them. As a result, his works seem natural, as if they are the result of a natural evolution: one things follows from another.

The form of the sculpture, by definition, is therefore natural. Jean Arp, who was also known as Hans Arp, due to his dual French-German nationality, was a major modern artist. He was in close contact with contemporaries and kindred artists such as Max Ernst, Piet Mondrian, Paul Klee, Wassily Kandinsky and other members of the Blaue Reiter (Blue Rider) group. He was a founding member of the Dada movement and was also a poet and graphic artist as well as a sculptor.

Number 8 on the map